Modern high-speed trains such as ICE and TGV also get their electricity from overhead lines. If the contact is broken at speeds of more than 300 km / h, arcs occur, which primarily damage the overhead lines. A new test bench in Vienna should now allow the development of even more powerful pantographs. 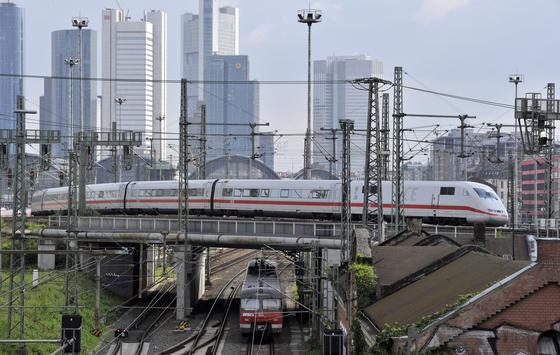 Pantographs on high-speed trains such as the ICE can cause major damage to the overhead contact line if the contact breaks. Researchers in Vienna have now put a new test stand into operation in order to develop new technologies for pantographs.

Modern trains of the ICE 3 series often speed over the tracks at a good 300 km / h. It is inevitable that enormous forces will act on the entire system. The contact pressure exerted by the pantograph on the overhead contact line causes it to vibrate. In the worst case, the pantograph then tears down the overhead line.

But there is also a risk of damage far below this worst-case scenario: If the vibration wave of the contact wire is just as fast as that of the train, the pantograph, also known as the pantograph, loses contact with the overhead line. “If the contact is no longer there, the pantograph draws an arc. Among other things, great heat is generated, which leads to heavy wear, ”explains Dr. Alexander Schirrer from the Institute for Mechanics and Mechatronics at the Vienna University of Technology.

This arc can not only damage the pantograph, it can also damage the overhead contact line. And that is expensive and has to be repaired at great expense. And during this time the train traffic has to be interrupted.

There is therefore great interest among pantograph manufacturers and rail network operators in preventing these arcs as reliably as possible. “Simply measuring the force exerted by the line on the pantograph and then readjusting the position of the pantograph is not enough,” explains Prof. Stefan Jakubek, head of the working group for control engineering and process automation at the Vienna University of Technology. "You need an active control system that can precisely predict how the system will behave in the next split second and take the correct measures with foresight."

At the Vienna University of Technology, engineers are developing new pantographs for high-speed trains together with the Melecs company.

In order to test such an active control system under realistic conditions, the Viennese company Melecs MMW, which manufactures pantographs for high-speed trains, together with the Institute for Mechanics and Mechatronics at the Vienna University of Technology, has set up a powerful and highly dynamic pantograph test bench. “The test bench allows virtual test drives at high speed under precisely controlled conditions. This is indispensable for the development of reliable pantographs, ”says Stefan Jakubek.

Virtual test drives in the laboratory

The advantage: Time-consuming measurement drives will no longer be necessary, and all tests and measurements will take place in the laboratory. "An industrial robot specifies the movement that corresponds to the behavior of the overhead lines during high-speed travel," explains Alexander Schirrer. “We can use it to study trips of 300 or 400 km / h in detail.” Underneath is the pantograph, the movement of which is controlled in real time with the help of various forecast models.

These tests are about active control of the pantograph and not about passive shaking of the system. With the help of a sophisticated control system, the vibrations of the overhead line are to be predicted every second and the movements of the pantograph are actively controlled accordingly.

To do this, the researchers need a mathematical model that precisely describes the overhead lines, the coupling between them and their interaction with the pantograph. “With a non-linear model with many degrees of freedom, we can understand the behavior of the system well, but it is too complicated to integrate it directly into the pantograph control,” says Jakubek. Because when a train rushes over the tracks at 300 km / h, there is no time for complex computer calculations, despite faster computers. Here it is necessary that the position of the pantograph is controlled in fractions of a second.

The Melecs company paid for the test bench

The aim of this research project is therefore to develop approximate solutions that are as simple as possible, with which the movement of the pantograph and the overhead line can be adjusted in real time. It is the many degrees of freedom of the system that rather complicate the requirement for such an approximate solution. The modeling approach aims to directly and reliably identify a differential equation for describing the dynamics of the overhead contact line from the measurement data, without having to know the underlying partial differential equations.

Melecs paid for the construction of the test stand. The pantograph manufacturer expects the research on this test bench to provide greater flexibility of use and, above all, of course, lower costs for its pantographs. A current collector contact piece in the pantograph for high-speed trains, for example, has a lifespan of just three days. That seems to be room for improvement.