What is a corporation? Definition and examples

The terms holding company and group overlap in many ways. In practice, the organizational forms of a group and a holding are very often similar. Therefore, the terms are often used synonymously.

Basically, a group is the amalgamation of several (large) companies to form an economic unit. The affiliated companies are either dominant or dependent: the parent company performs a dominant role as central group management, while subsidiaries are the dependent units. In order to be considered a group, all that is required is a parent company and a subsidiary, with the subsidiary giving up its economic and financial independence. However, the daughter remains legally independent.

According to Sections 15 to 19 of the German Stock Corporation Act, a group consists of at least two legally independent companies and uniform management. The concept of the group originally comes from stock corporation law and initially only applied to the stock corporation (AG) and the partnership limited by shares (KGaA). The term group is now used for affiliated companies of any legal form.

Differentiation from the holding company

What are parent companies and what are subsidiaries?

Parent companies are the superordinate, controlling companies, while the subsidiaries are always subordinate.

Examples for a group

In this greatly simplified flowchart for the Bertelsmann Group, you can see how diverse companies can be. Each subsidiary has additional subsidiaries and sister companies. So-called intermediate companies (which are mostly located in low-tax countries) have also been added to the group, which serve for asset management and thus carry out a purely organizational (financial) and non-executive activity. In addition, the individual companies in the group structure have different legal forms: AG, GmbH, the French Société Anonyme (S.A.) and the special form of GmbH & Co. KG. 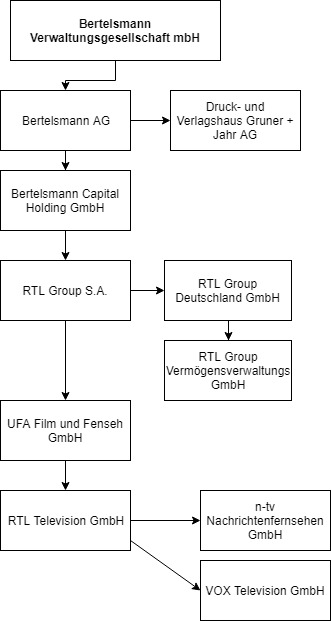 Group formation: How does a group come about?

The bigger a company gets, the more useful it becomes to split up economic risks. For many companies, expansion is only possible in this way. With the formation of a group there are many opportunities to withstand changes in the influencing factors of a complex market. In this way, parts of the operational business can be distributed over several companies.

The dependency or control arises through equity participation (§ 16 AktG) or a domination and profit transfer agreement (Section 291 AktG). Some entrepreneurs set up a holding structure right from the start in order to financially consolidate the resulting group and create a clear structure with regard to liability.

A contract group in accordance with Section 291 of the AktG is created through the conclusion of a domination or profit and loss transfer agreement. The authority to issue instructions and thus a uniform management is anchored here, which leads to a strong form of group loyalty. The dependent company hereby submits its management to the controlling company.

The most intensive form of group law subordination is the integration according to §§ 319 ff. AktG. It represents an intermediate stage between the merger of two companies and a contract group. It is assumed here that the controlling company owns all the shares in a company and thus has the right to issue instructions and assets. In contrast to the merger of two companies, the integrated company remains as a legal person. In the event of integration, instructions that threaten the existence of the dependent company may even be issued. However, the ruling company is liable for all liabilities here.

In contrast to the contract group and integration, the management structure and asset protection of the dependent company within a de facto group in accordance with Sections 311 to 318 of the German Stock Corporation Act (AktG) remain intact. In the case of a de facto group, there is no domination agreement: The dominant company exercises its actual control through other company agreements or another justified dependency, such as a majority shareholding.

The larger and more structured a group is, the more often it happens that group levels are installed, each of which forms a subgroup. Subgroups are particularly relevant for the accounting of a group, since parts of a group may be considered separately.

In so-called joint ventures, several companies come together to form a cooperation. Control is not with the parent company, as is usual in a group, but with the subsidiary. Thus, just like with nesting companies, it can be difficult to find out who is responsible.

Economic structure of a group

In corporations there are not only a wide variety of structure options with regard to the legal forms that can be broken down within the group, but also various business forms:

IKEA is a well-known example: From design to production, purchasing, logistics and sales, all corporate areas are vertically structured within a group.

The form of the vertical group is nowadays partly obsolete, as many companies obtain the cheapest possible supply parts or raw materials from external, foreign companies. Recently there has also been a counter-movement against this movement, which refers to its own production or harvest and thus offers the customer a transparent service from a single source.

The economic form of the horizontal group describes a group in which several companies are organized on the same hierarchical level within the group. For example, many manufacturers produce both low-end and high-end products in order to monopolize their market.

Bayer AG is an example of a horizontal group in Germany. The major operational areas of pharmacy, prescription-free health products and crop protection are arranged side by side.

A conglomerate, also known as a diagonal or lateral group, describes the amalgamation of companies from different industries. Other names are multicompany or conglomerate. The main feature here is the strong diversification of the individual companies.

A prominent example of a conglomerate is the Trump Organization owned by Donald Trump. It is a multicompany consisting of very different business areas such as real estate, hotel, golf, education and clothing.

These terms do not describe the structural structure of a group, but the economic relationship between the independent companies. Organic corporations arise when (branch) related companies merge (see examples from IKEA and Bayer). In contrast, inorganic corporations are characterized by the lack of economic reference to the individual elements (see example of the Trump Organization).

Organizational structure of a group

It differs from the subordinate group in that the merged companies are not dependent on any superordinate, ruling company; the management bodies of the group with equal order are contractually regulated in coordination with the affiliated companies. The companies of the group are therefore in an equal position without a higher hierarchical level. Companies at the lower levels are given the opportunity to exert influence on corporate policy through shareholdings, for example. The group of equal order is found relatively rarely in practice, while the subordinate group is the typical variant from practice.

Organizational forms of the holding company

The holding company is the parent company of a group that holds the other affiliated companies. How many shares the mother owns in one or more daughters is irrelevant. The holding company serves the organization within the group, but can also take different forms:

While there are clear principles of liability for a holding company, the situation is different for a group. Although most holding structures conceptually overlap with those of a group, different rules apply here: Within holding structures, liability always depends on the legal form of the subsidiary. If the subsidiary is a partnership, the holding company is jointly and severally liable. If these are corporations, liability remains with the respective subsidiary.

Within a group, liability can vary between the individual companies in the group. In principle, the affiliated company's own and exclusive liability for the obligations it has entered into applies. However, the economic interdependence of the group-internal companies is of the utmost importance: Since a large number of companies in Germany are group-related, the question arises for many creditors whether not only the company concerned is liable, but also the entire group or the parent company.

Liability in corporations with equal order

Often it is difficult for the courts of justice to assess which legal person has liability claims against which there are legal entities. The legal situation is so complex because a management contract is concluded between the subordinate and superordinate companies, but this does not count as a company agreement within the meaning of the Stock Corporation Act. That is why the courts of law pay close attention to loss compensation. Loss compensation occurs when the company is split up, i.e. the company has been split up, for example into an organizational and an operational company. Since there is no control agreement or a uniform (higher-level) management that can be consulted with a group of equal order, the direct liability applies in this case.

The individual annual financial statements of the subsidiaries and parent companies are generally less meaningful due to the many business relationships within the group.

In addition to the economic risk, a group also reduces the tax burden for the individual company. Some tax law peculiarities apply to corporations. According to the law, entrepreneurs who run several companies would have to pay certain types of tax more than once, depending on how many companies they own. In order to avoid this double taxation, there is, among other things, the so-called box privilege, with which corporations can benefit from reduced corporate or trade tax.

The information published on our site is all written and checked by experts with the greatest care. However, we cannot guarantee the correctness, as laws and regulations are subject to constant change. Therefore, always consult a technical expert in a specific case - we will be happy to put you in touch.

firma.de assumes no liability for damage caused by errors in the texts.