What are some interesting Hanukkah traditions 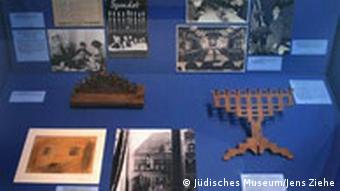 In the Jewish Museum Berlin

Two celebrations between tradition, commerce and family, with religious beliefs or political messages. "Chrismukkah - Stories of Christmas and Hanukkah", an exhibition in the Jewish Museum Berlin, now explores the historical origins of both festivals and their development through the centuries, their similarities and differences in six chapters. Christmas tree-shaped display cases offer everything you need to know about Christmas. Opposite are showcases that are modeled on a Hanukkah candlestick and pick up on the customs of the festival of lights.

For many Muslim children who live in Germany, it has long been a matter of course that they receive an Advent calendar in the run-up to Christmas. Quite a few of them even sit under a Christmas tree on Christmas Eve and look forward to the blessing of gifts. These customs have nothing to do with one's own religion, but they are gladly accepted. Because Christmas is so beautiful and a family celebration. Something similar was probably thought in Jewish families at the end of the 19th century. Because it was during this time that many of them began to adopt the traditions of the Christian Christmas feast: 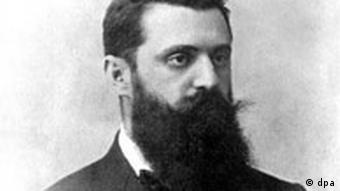 At first, Zionist circles had nothing but ridicule for this: "Chrismukkah" was the title of the festival for which there was actually no public holiday, but which had long been a tradition. Admittedly, even Theodor Herzl didn’t want to refuse his children’s desire for a Christmas tree: "I’m supposed to call it the Hanukkah tree," he is said to have said, thereby building a bridge to the Jewish Festival of Lights.

Hanukkah is a festival commemorating the liberation of the temple in Jerusalem in 165 before time. In the center of Hanukkah, which is why it is also a festival of lights, there is the so-called oil miracle, namely that in the temple in Jerusalem after the liberation a small, tiny residue of oil, which actually could only have burned for one day, miraculously burned for eight days. That is why the Hanukkah candlestick has eight arms. 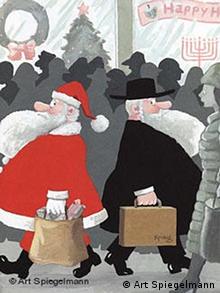 Jews light candles in the dark December days to commemorate a political victory, while Christians celebrate the birth of their Savior. And, as the lovingly designed exhibition in the Jewish Museum makes clear, many customs have changed over the centuries. For a long time, Advent was considered to be Lent in Catholic areas, and instead of butter, only oil was allowed to be used for baking. In his so-called "Butterbrief" the Pope lifted this ban in the middle of the 15th century. From then on, milk and butter were also permitted as ingredients for Christmas stollen. 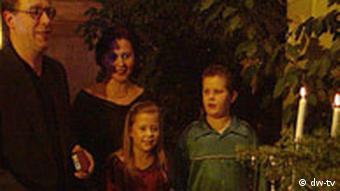 In the Biedermeier period, Christmas moved away from its Christian roots and became a family festival with a Christmas tree and gifts. And so it also became attractive for Jews who were alienated from Judaism but patriotically connected to German culture. "Chrismukka" was born, a Jewish Christmas festival, when "Treidel" (toy spinning top) hang on the Christmas tree and instead of gingerbread there are latkes to eat, potato pancakes deep-fried in oil.

Through the oppression and persecution of the Jews in the past century, Hanukkah became more and more important in its idea. Especially in war. Then Hanukkah became meaningful, especially in the modern state of Israel, through the immigration movement into the country. The festival is no longer so closely tied to any religious ritual, but rather it is about remembering the spirit of resistance.

In addition to all these historical retrospectives, which also include the perversion of Christmas by the Nazis, which offered submarines and iron cross decorations as Christmas tree decorations, the exhibition organizers keep coming back to the mixing of the two festivals.

This intermingling has been particularly pronounced and commercialized in America since the end of the Second World War. There are chess games in which Santa Clauses and rabbis face each other, headgear that looks like a kippah and Santa hat, and carved reindeer that serve as Hanukkah candlesticks. The exhibition also features the musical hit: "White Christmas", the real Christmas hit, composed by Irving Berlin, an Orthodox Jew from New York.