Can oxygen be dissolved in nitrous oxide 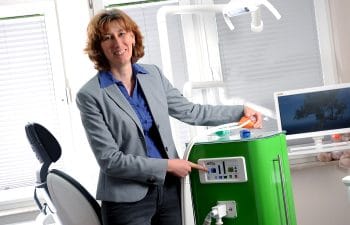 Like other inhaled anesthetics, nitrous oxide is absorbed through the lungs, dissolved in the blood and absorbed in the central nervous system, where it takes effect. Nitrous oxide is relatively insoluble in blood (blood-gas coefficient 0.47), so that the alveolar concentration in the lungs and the concentration in the blood quickly equalize. This phenomenon, coupled with a high lipid solubility, which is necessary for distribution in the central nervous system, leads to the onset of action within minutes. The depth of sedation can be quickly varied by the dentist by changing the inhaled laughing gas concentration.

Nitrous oxide displaces nitrogen as it is absorbed into the bloodstream. Since laughing gas has a higher solubility than nitrogen, less nitrogen is released in the blood than laughing gas is absorbed. A relative vacuum is created and leads to the so-called concentration effect or “second gas effect” with higher than expected nitrous oxide concentrations in the alveoli.

This phenomenon causes two further important properties of nitrous oxide: First, it diffuses rapidly into encapsulated gas pockets and can lead to cavity expansion. The nitrogen present in the cavity cannot diffuse out as quickly as the nitrous oxide diffuses in. Mastoid cells or intestinal loops are mentioned as examples. Second, when nitrous oxide is turned off, the opposite of the concentration effect occurs. The nitrous oxide is quickly eliminated in the direction of the lungs and dilutes the available oxygen.

This happens within the first few minutes after the nitrous oxide is switched off and causes what is known as diffusion hypoxia. A simple evasive maneuver is the administration of 100 percent oxygen for a few minutes at the end of the nitrous oxide inhalation. This practice is generally accepted as a good standard, although it has been shown that dental patients will not experience problems without the final dose of 100 percent oxygen.