What does the Bible say about shaving

Nobody knows what Jesus really looked like: there is no reference to this in the New Testament. Even the church fathers of the first and second centuries do not give any information about Jesus' appearance, and consequently also not about his beard - probably to avoid unwanted veneration of images.

This article is older than a year.

The historian Karl Brunner imagines him to be beardless: “A well-groomed young man of the Jewish middle class in the Roman cultural area tended to have no beard,” he told ORF.at. As a carpenter, Jesus belonged to this shift, as did his disciples. At the time, shaving was expensive and reserved for the wealthier, so people probably only shaved once a week. If Jesus was buried before the Passover feast, as the Bible says, his beard at the time of the crucifixion is most likely a kind of three-day beard, because shortly before the feast, shaving would have been a religious duty, according to Brunner. But Jesus would not have come to that anymore.

Ancient representations: once with, once without

Just as interesting as considerations about the actual beard status of the historical Jesus is the question of the iconography, the pictorial representation of his person. Instead of pictures of himself, Christ was initially represented in ancient times by his symbols such as the fish, a cross or his monogram.

In the apocryphal writings (texts that revolve around biblical subjects but do not formally belong to the Bible) there is a description of Jesus as a handsome young man. In early depictions from the third century onwards, Jesus is often shown in the garb of the “good shepherd”. He usually doesn't wear a beard and has short hair, in keeping with the Roman tradition. In this unspecific manifestation, the youthful Jesus is often compared with the Greek singer-hero Orpheus. 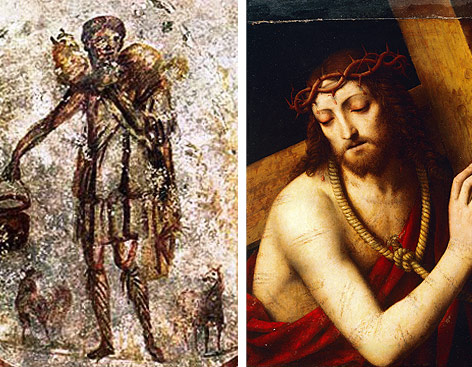 Jesus as the "good shepherd" in a depiction from the third century (left) and a crucifixion scene by Bernardino Luini (approx. 1481 to approx. 1532)

In the representations of late antiquity, the appearance of Jesus still varies greatly. He is just as often shown as an agile and beardless youth in the tradition of images of the Greek god Apollo as as a wise, sedate beard. The oldest two crucifixion images that can be dated with certainty date from the fifth century. One of them, a wooden relief from Rome around 430, shows Jesus with a beard, the second, an ivory work from Italy from 420 to 430, shows him with a smooth face.

A portrait, not made by human hands

The idea that there was a divine power inherent in an image of Jesus that was as faithful as possible gained increasing followers from the fourth century onwards in Byzantium. Images of Christ in tombs and households, even on robes, became common. This made the question of his appearance more urgent.

The desire to “know” the face of Christ was met by the spread of acheiropoiets in the sixth century. These images or imprints on walls, bricks and pillars, which according to legend were not created by human hands but “by divine intervention”, appeared in Syria and Asia Minor and mostly depicted Jesus or Mary. One of the most famous Acheiropoiets is the Abgar image , a supposed imprint of Jesus Christ's face on a cloth. 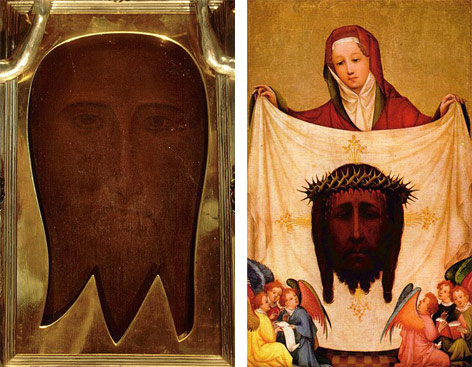 The original legend said that a messenger from Prince Abgar V of Edessa in what is now Turkey, on his behalf, painted a picture of Jesus during his lifetime. Church historian and church father Eusebius reports on an exchange of letters between Jesus and Abgar, who asked for his illness to be cured. In a later legend it is said that Christ himself sent an imprint of his face on a handkerchief to Abgar. This handkerchief or mandylion, which was brought to Constantinople and later reached Europe in the course of the Crusades, became the model for the icon of Christ. It shows a face painted frontally with a long nose adorned with a beard.

Since the sixth century, Jesus has had a full beard throughout. The Veronica legend, which also revolves around a handkerchief with the embossed face of Christ, also came into being at this time. The later saint is said to have handed the cloth to Jesus on his way of the cross to Golgotha ​​to wipe away sweat and blood with it. A perfect imprint of his face remained on the cloth. Veronica's handkerchief also shows a bearded face in all depictions. 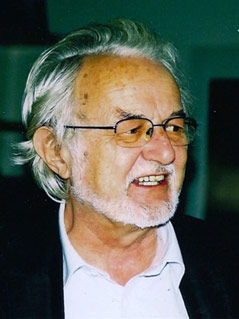 The basis for the type we are familiar with today was laid: These two impressions represent the ideal image according to which future depictions of Jesus were mostly designed. “The Veronika picture continued to have a strong effect,” says Brunner. “Once an icon has been constituted, a variant is no longer possible because it is 'the true face of God'.” The controversial shroud of Turin also follows the model of the bearded, rather long-haired Jesus. In the eyes of many believers today, the piece of fabric on which the outlines of a male body are drawn is the shroud in which Jesus was wrapped when he was buried. "There may have been many representations," says Brunner, "until one came into the right hands."

The highlighting of the beard need not necessarily have been done consciously: the beard was in any case included in the icon, according to the historian. And it fit in well with the time: the secular rulers of the Middle Ages often wore full beards. This “ruler's beard”, as it was for example worn by Friedrich I Barbarossa (1122 to 1190) in his face and name, was intended to give the emperor or king dignity and set him apart from the common people.

Of course, one would have to look at each of the Jesus pictures individually - the question is also what the aim of the respective artist was, says Brunner. Another type of beard in iconography besides the ruler's beard is the “wisdom beard” as worn by prophets in pictures. The rather short, trimmed beard with which Jesus is usually depicted does not quite fit into this type of flowing prophet's beard. Similar to the ruler's beard, this serves to emphasize a person and confer an aura of wisdom and dignity. The “Chief Apostle” Peter is depicted with a beard, but the Roman Paul is depicted without facial hair - here again the Roman tradition comes through, according to which respected citizens shaved smoothly.

The Roman tradition has persisted in the Roman Catholic clergy to this day. “Basically, it has become established in the West that clergymen should be beardless,” historian Brunner told ORF.at. Popes, too, were and are generally clean-shaven. “The prophet's beard prevailed in the Byzantine tradition,” says Brunner, for example among the Orthodox clergy of the Eastern Church. In this context, the well-groomed Jesus beard could definitely be understood as a “trademark”, according to Brunner. The beard has definitely become an indispensable part of the imagery for the story of Jesus.