99 of our decisions are emotional 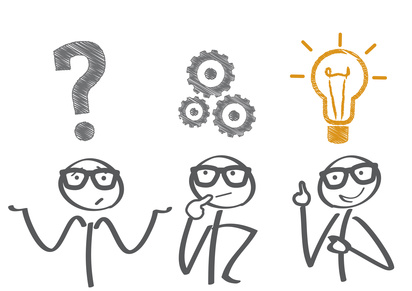 Part 1: Success is a question of making the right decision

Success is often associated with competence, intelligence, relationships and experience.

The better explanation, however, is the lottery analogy: If you haven't hit the jackpot yet, you've obviously not typed the correct numbers, means… ..make a wrong decision.

In order to better understand the findings of brain research with regard to our decisions, let's briefly consider the functional structure of the human brain. This is important in order to understand how certain functions of our brain work and where the individual functions are located.

By and large, our brain can be divided into two subsystems:

However, these two systems cannot be viewed independently of one another, since strong connections to areas of the cognitive system have been found in the structures of the emotional system, in particular connections to parts of the hypothalamus, the thalamus and the cerebral cortex.
One of the most famous brain and emotion researchers, Joseph LeDoux, says: "The theory of the limbic system as the sole explanatory approach of the emotional brain is wrong!"
The starting point of the emotional system is the brain stem. It integrates the external and internal information of the body into an overall picture and is involved in maintaining our emotional and physiological balance.
An important interface between the emotional and the cognitive system is the cingulate gyrus. It is activated when there are conflicts of emotions and motives.

The amygdala is also part of the emotional system. It is connected to the hippocampus by nerve tracts. Both together, the amygdala and hippocampus, are responsible for the initial registration, processing and transfer of emotional information into long-term memory.
The orbitofrontal cortex is located in the anterior frontal lobe. The motive and emotion systems converge in this area. The orbitofrontal cortex is also responsible for storing emotional experiences.
The temporal lobes play another important role. They process the meaning of sensory impressions and put them together to form an overall picture.
And last but not least, the thalamus and hypothalamus play an important role in our considerations.
Incoming information from our sensory organs is processed in the thalamus. And the hypothalamus has tight control over many body functions. In connection with the pituitary gland, i.e. the pituitary gland, it forms the most important control system for our emotions.
So we see how closely and complexly the functions of our brain are connected. And what use is this knowledge for decision-making? One of the most important findings for market research is:
There are no rational decisions without the involvement of emotional processes.

Man is a herd animal. Its survival does not only depend on the satisfaction of its basic needs such as food, sleep or reproduction. Nor is he just out for his own survival and a master of escape who quickly escapes the saber-toothed tiger. He is primarily focused on survival in and with his herd. So our survival depends very much on how good we are at integrating into a social network.
According to classical economic theory, humans are homo oeconomicus, i.e. a being who aligns its decisions and behavior according to the principle of cost-benefit optimization.
This notion is now not only outdated, it is also simply wrong, as the following examples should show us:
Suppose you want to buy a new TV and have a choice between cash or an interest-free installment plan. If you were to proceed purely according to cost-benefit optimization, you would have to opt for installment payments so that your money remains in your account and earns interest there. One or the other does, too, but most people choose to pay in cash in such situations.
It has also been proven that when customers see a discount sign, they also get it if the price is objectively not cheaper. They even grab it when the price is higher than it would be without a discount sign. That too has little to do with a homo oeconomicus.

Just think about your first driving lesson and how strenuous it was because you had to consciously carry out every move when you started the car, and how routinely, i.e. energy-saving, you drive off today.

Unconscious processes require much less energy consumption than conscious processes!
Since everyone is an individual, their unconscious desires and motives are also very individual. Nevertheless, there are some desires and motives that are the same for all people.
Man is a herd animal. So our survival depends very much on how good we are at integrating into a social network. It was found many years ago that children in hospitals who had no contact with a caregiver became mentally ill. When employees in a company are marginalized, anxiety and depression arise. Social disregard even leads to the same areas being activated in our brain as when you actively inflict physical pain on someone.

Success is a question of making the right decision

Back to the question: Why is Warren Buffett the richest man in the world? Because he chooses the right stocks.
Why is Heidi Klum happy? Because she has chosen the right partner (at least for the moment).

The answer is simple. We never learned to make the right decisions. We learn arithmetic and write at school, but foreign languages ​​but not how to make decisions. So let's deal with decision-making, because whoever decides better lives better.

Analyze your wrong decisions, think for a moment about your decisions and when you were really wrong the last time. Put the anger aside and focus on the voice in the back of your mind telling you: "I should have guessed that!". But what exactly could you have thought? Of course, it's annoying to always know better afterwards than before. On the other hand, it is very helpful if you can determine what you are doing wrong in making a decision. This is an important step towards making better decisions.
Now think for a moment about your wrong decisions in the past, take the two or three most important ones and supplement these wrong decisions alternately with the following sentences.

Many people can say relatively precisely what their weaknesses in their decisions are: e.g. I commit myself far too quickly or I just don't listen to my mind or why do I trot after the crowd so often.

The power of consciousness

When you have uncovered your unconscious decision-making pattern, you can begin to make sensible decisions.
Do not fight your "quirks" that tire and do not help, it only burdens unnecessarily. So contrast your quirks with virtues. Example: I always make decisions too spontaneously and quickly, which leads to virtue, it is okay if I spontaneously decide on an option. But before I really make a decision, I make a pro and contra list with at least 5 points. With this I check my spontaneous determination again before I actually implement my decision.

example: Claudia took over her parents' craft business and over the years put some money aside when the bank calls:

Wrong habits do not make sense of mistakes. Claudia's wrong decision-making habits were:

Your new decision rules are:

Now take your classic wrong decisions again and draw up your own rules as simply as possible. Load these rules with a lot of feeling and emotion because of the wrong decision. And make sure you only make decisions based on these rules.
That is why they say that success can be planned. Because if you follow the right decision-making rules, you will automatically make the right decisions.
The bank advisor Werner is now in despair of Claudia, because regardless of which ship fund or biogas bonds he suggests to Claudia, she can no longer be convinced. She sticks to her rules and has not made any financial mistakes since then.
But new rules often feel wrong. But they are not wrong, they are unfamiliar. To make new habits, you need to repeat them at least 5 to 6 times. Then the wrong feeling disappears more and more with each repetition.

Everyone knows that smoking is wrong and still it feels good. Many managers say that I am a head person, I know that I should also listen to my feelings. But there is a dichotomy, because decisions should be based on facts and data, and the right decision-making rules often feel wrong.
Make yourself aware of the dichotomy. It is the interplay between the cognitive system for processing information (cortex) and the emotional system for processing feelings, the limbic system. Then you better decide.

Source of the article: AFNB - Academy for Neuroscientific Educational Management

Joachim Berendt is the owner of the management consultancy BERENDT & PARTNER, Saarbrücken, partner at Berendt Rach & Partner Personalentwicklung GbR, Mömbris, and initiator and founding member of the "Offensive Mittelstand - Gut für das Saarland". After 12 years as a board member and managing director of medium-sized companies, he has been a proven expert advising medium-sized companies in corporate culture, knowledge management and personnel development since 2004. He has 22 years of experience as a board member, teaches at several universities and is a member of the Academy for Neuroscientific Educational Management. His consulting company Berendt & Partner is certified for its quality advice by professional associations and by TÜV Süd according to ISO 9001: 2008.