What is the taste of a cola

The taste is deceptive! - How the Coca Cola brand outwits our sense of taste

We have clear taste preferences - such as the preference of Coca Cola over Pepsi or red over green gummy bears, although we usually could not distinguish between these products in a blind test. This is due to the fact that taste sensations are not only conditioned by our tongue, but also by the psyche.

Which do you like better: Pepsi or Coca Cola? If you ask this question to a representative sample, most people prefer Coca Cola. But does Coca Cola really taste better than Pepsi? Could you differentiate these two drinks in a blind test?

Samuel McClure and his colleagues from Houston University investigated exactly these questions in a study. Test subjects were each served three times two cups with a drink. The subjects tested the two drinks each time and then had to decide which one they liked better. In one group, the two drinks were served in neutral glasses so that the test subjects did not know which drink they were trying. In another group, the test subjects were only served Coca Cola or Pepsi, the drink being served in a Coca Cola and in a Pepsi glass. 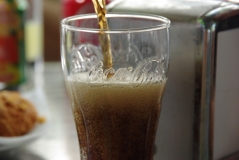 To find an explanation for these results, the researchers placed the test subjects in an fMRI scanner after the taste test and showed them pictures of Coca Cola and Pepsi. It was shown that images of the Coca Cola brand activated those areas of the brain that are also responsible for controlling positive emotions.

Objectively speaking, Coca Cola tastes no better than Pepsi and cannot be distinguished from Pepsi in the blind test. Since Coca Cola has an enormously strong brand image, it can arouse positive emotions and therefore also have a positive effect on our taste experience. Incidentally, this finding can also be transferred to other taste experiences: differently colored gummy bears taste so different, especially because the color of the gummy bears suggests a specific taste. Realistically, you would not be able to taste a difference in the dark - give it a try!