What are the Berbers

Trans Africa - accurate travel information for all countries in Africa

Berber are considered the first residents in the present day Morocco viewed.

Little is known about the origin of the Berbers, as there is no written Berber language and therefore no records. You describe yourself as Amzirin, as "free people".

The Berbers are not a single people. There is no real tribal system, the largest social unit is the extended family, it is only in times of need that people come together to form a tribe, which, however, disbanded again after the crisis. To this day, three major Berber languages ​​are spoken: Taschelhit, Tamazight and Tarifit. 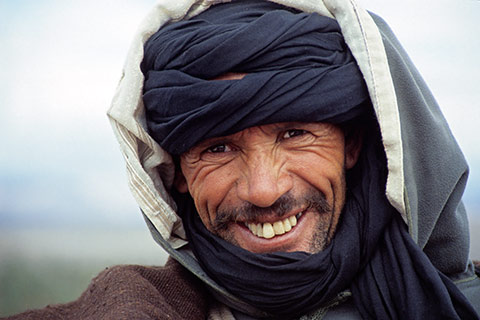 The term "Berber" encompasses several communities in northern Africa, a common feature of a Berber language. Among other things, the Tuareg to them. Your name probably comes from the Greek / Roman where the word "barbari" means someone who stutters. In general, this was the name given to people who did not speak Latin.

Before the Arab-Islamic expansion in the 7th century, they reached in a closed distribution from the Canary Islands (Guanches) to the western border Egypt. After Roman rule (around the beginning of the 5th century) the Berbers had to submit to the Arabs at the end of the 7th century.
The Berbers were displaced into the mountains and deserts by two Arab tribes from Saudi Arabia. The Saudi nomads were sent to by Arab rulers Morocco to arabize, which also succeeded. Islam was quickly adopted by the Berbers, but uprisings soon broke out because of discrimination by the Arab Muslims.

Today around 50% of Moroccans are Berbers, but this is difficult to assess because of the mix with Arabs.
To this day they are a freedom-loving, warlike people. Death in combat is still considered honorable, until recently there was a fatal insult: "Your father died in his bed!".

The Berbers live mainly in arid areas; without river oases, survival would hardly be possible. If the water level is sufficient, irrigated agriculture can be carried out here in winter.
Water is supplied from rivers in open irrigation channels. This irrigated land is family property, families have rights to certain amounts of water. This is run across their surface during certain cycles.

Agriculture is supplemented by cattle breeding in summer. In spring, the families lead the herds of sheep and camels into the mountains. Individual relatives are left in the fields for supervision. In autumn, before it gets too cold, the families return to the warmer valley.
In contrast to the houses in the valleys, people live in temporary, mobile accommodations in summer. Often this only consists of a windbreak and a tent camel-Hair blankets.

The extended family is still the center of Berber society and the most important social unit. The individual counts next to nothing, because it is part of the whole. Without integration into a large family, the individual would hardly be able to exist in traditional society.
The next larger unit is formed by kinship groups with a common male ancestor three to five generations ago. In this group you feel like a family, in which everyone helps everyone.
Several kinship groups form a clan. The cohesion is less intense here and only important for nomads in the Atlas. Here, among other things, face tattoos, especially on women, show that they belong to a clan.