Why argon is bigger than chlorine

The noble gases are absolutely inert

Let us consider a sodium atom and a chlorine atom and use the spherical cloud model for this:

Sodium has one electron too many, chlorine one too few

I have highlighted the two interesting spherical clouds in color on this drawing.

According to the octet rule, each atom strives for the closest noble gas state. For this purpose, the atom can take up or release electrons. The sodium atom in the figure lacks seven electrons for the argon state. Of course, taking in seven electrons is a bit much to ask. It is much easier if the sodium gives up the only electron from the outer shell. Then the second outer shell suddenly becomes the outer shell, and it is then occupied by eight electrons - the noble gas state of the neon gas has been reached.

The chlorine atom lacks an electron for the argon state, it has to accept an electron. 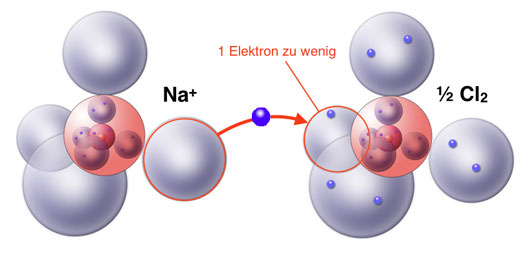 Sodium gives its excess electron to the chlorine atom; both reach the noble gas state in this way

The electron transfer has been completed successfully

Both ions can be seen in this picture. The sodium has given up its outer shell, and the second outermost shell has become the new outer shell. As a result, the sodium ion is much smaller than the former sodium atom. The chloride ion is slightly larger than the chlorine atom, but this cannot be clearly seen on this drawing. 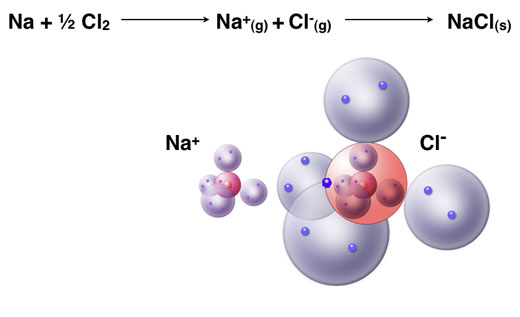 Finally, in this last picture in the series, we see that the two ions attract each other. I also wrote down the reaction equation for the implementation. As an intermediate product of the reaction between sodium and chlorine, the gaseous ions are initially formed, which then combine to form a solid sodium chloride crystal. The electrostatic chemical bond between the oppositely charged ions is also referred to simply as the ionic bond. The ionic bond is a very strong intramolecular chemical bond, comparable to the electron pair bond or the metal bond and much stronger than, for example, the intermolecular dipole-dipole interactions or even the van der Waals forces of attraction.

We want to break down the formation of table salt from the elements sodium and chlorine into the individual reaction steps and consider the energy conversion for each individual step. Let us first consider how the two starting materials are present. The sodium is present as a solid, the chlorine as a gas.

In order for solid sodium to react with chlorine, it must first be sublimed (evaporated). The energy required for this is called sublimation energy. Sublimation is an endothermic reaction, the enthalpy of reaction for this is +107 kJ / mol.

The chlorine is already in a gaseous state, but chlorine molecules consist of two chlorine atoms: Cl2 (g). These two atoms have to be separated from each other. To do this, the forces of attraction that exist between the two atoms must be overcome. The dissociation energy is +242 kJ for a chlorine molecule. Since we only need half a chlorine molecule, we only count +121 kJ for the formation of one NaCl unit.

So far we have "put" exactly 107 + 502 + 121 = 730 kJ / mol of energy into the reaction. However, we know from experience that the reaction of sodium and chlorine to form solid sodium chloride is quite exothermic. So the remaining reaction steps will have to deliver a lot of energy, in any case significantly more than the previous 730 kJ / mol.

The gaseous chlorine atoms Cl(G) need to pick up an electron to complete their outer shell. When the electron enters the electron shell, new forces of attraction arise because the new electron is attracted to the atomic nucleus. Therefore this step is exothermic. The energy released is called electron affinity, and for a chlorine atom it is -355 kJ / mol. The minus sign shows us that the energy is being released; the substep is exothermic.

We have thus recovered part of the 730 kJ / mol that we initially had to "put" into the reaction. The balance is still +375 kJ / mol, which means that the overall reaction is still not exothermic, but endothermic. So there has to be a step that releases at least 375 kJ / mol, but probably more, because as we know, this is the overall reaction quite exothermic and not just a little.

Formation of the crystal lattice

The gaseous Na+(G)Ions attract many Cl-(G)Ions on and vice versa. An ion lattice is formed. And in this step, in fact, a great deal of energy is released per mole, namely 788 kJ. The lattice energy, as this amount of energy is called, amounts to -788 kJ / mol.

If we subtract this amount from the previous subtotal (+375 kJ / mol), we get a final result of -413 kJ / mol. This is then the enthalpy of reaction of the overall reaction, in which solid sodium and gaseous chlorine are converted into solid NaCl.

Let's draw the whole thing in the form of an energy diagram: 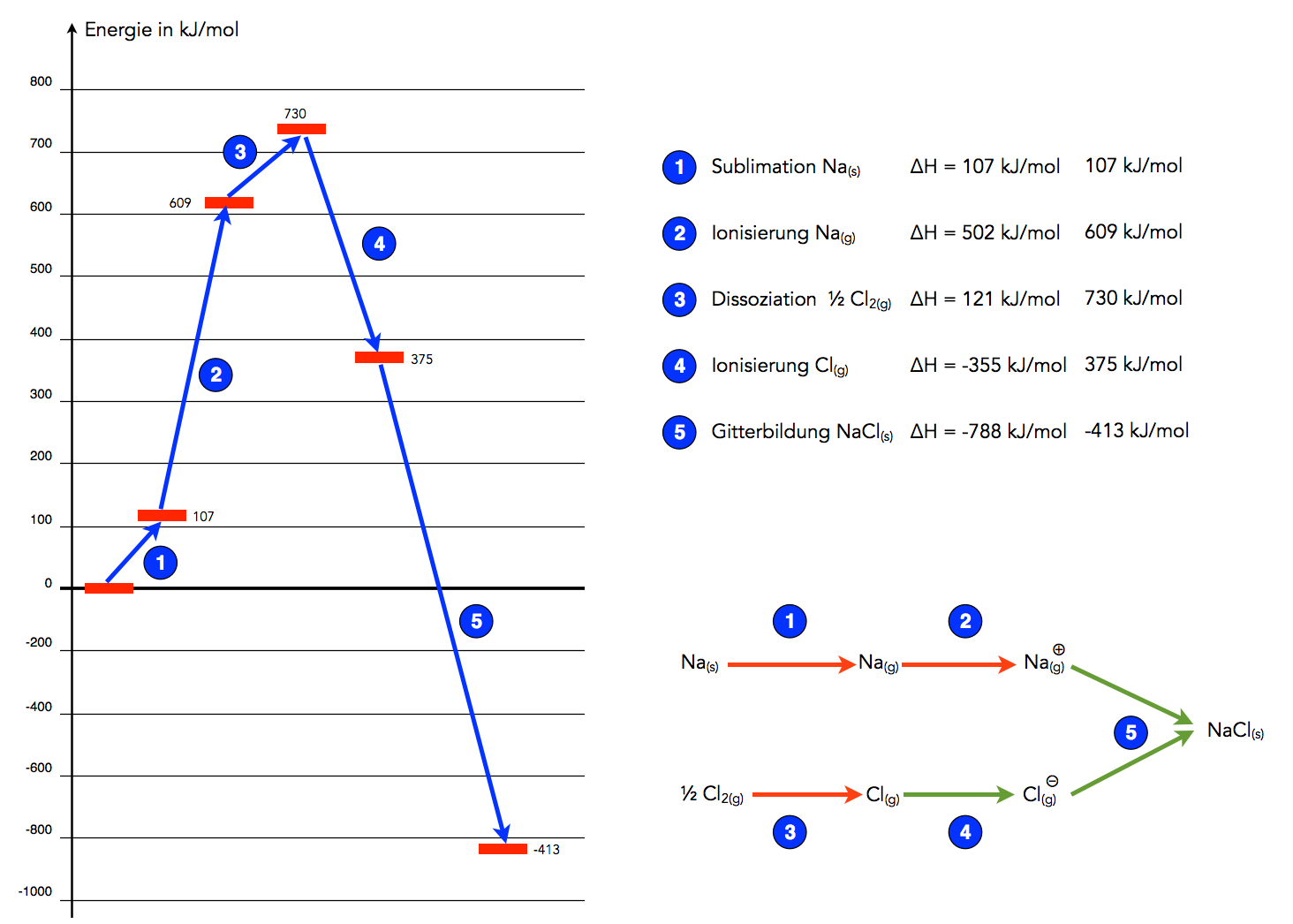 Energy diagram of the formation of sodium chloride

The whole thing now looks clear. There is one catch, however. The substeps listed above do not necessarily run in the order suggested by the diagram. While a Na atom is sublimating, a chlorine molecule can be split at the same time, and at the same time another sodium atom can just donate an electron. Basically, the steps run independently and side by side. For this reason you will not find any labeling on the x-axis of the diagram. In no case should you imagine that the x-axis is a time axis. 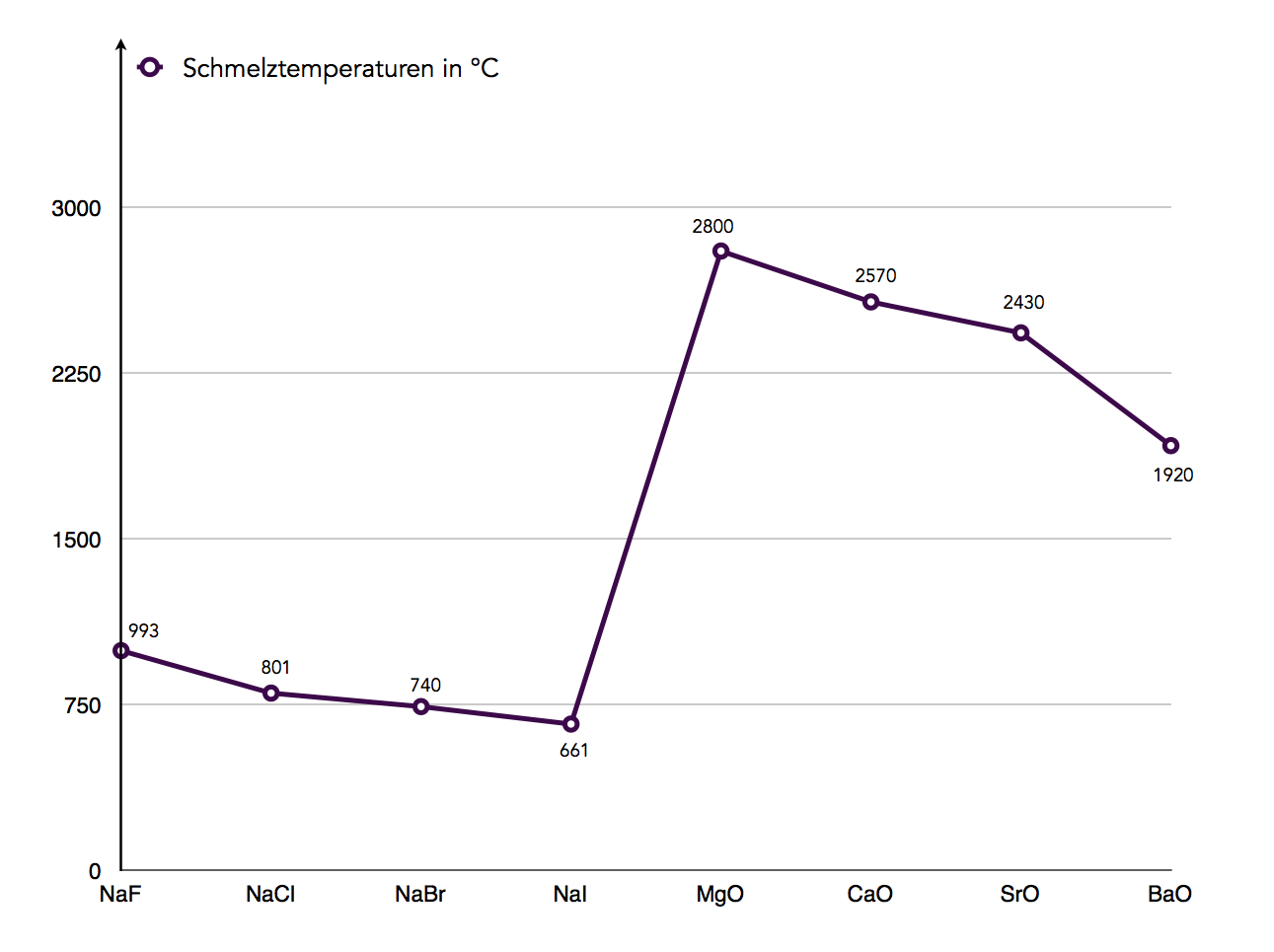 The diagram above shows how the melting temperature (in degrees Celsius) of various salts depends on the distance between the ions (in pm) in the crystal lattice.

In general, one can say at first glance: The larger the ion distance, the lower the melting temperature.

It is easy to see why this is so. The forces of attraction between the ions mainly depend on two variables: the ion charges and the ion spacing.

The larger the ion charges, the stronger the attractive forces.

In our diagram, however, all ions have the same charge, namely +1 or -1. A compound like calcium oxide CaO would have a significantly higher melting temperature because of the double ion charges (+2 or -2).

The greater the ion distance, the lower the attractive force.

The ion distance naturally depends on the radii of the two ions. Sodium ions have a radius of 102 pm, chloride ions a radius of 181 pm. Together that's 283 pm. Iodide ions have two more electron shells than chloride ions, so their radius is much larger: 220 pm. The distance between sodium and iodide ions is correspondingly large.

Now you can certainly easily understand why, for example, magnesium oxide MgO has such a high melting point (2,800 ºC). At 212 pm, the ion distance is even smaller than that of NaF (see graphic), but this would not explain a melting temperature of 2,800 ºC, but rather a melting temperature of 1,100 or 1,200 ºC at most. The reason for the high melting point is the charge of the magnesium and oxygen ions, both of which are doubly charged, so the resulting attractive force is four times greater than with singly charged ions that are at the same distance from each other.

Calcium oxide CaO has a lower melting point (2570 ºC), because calcium has one more electron shell than magnesium and therefore the ion radius and thus the distance between the ions is greater with the same charge. The melting temperature of barium oxide is correspondingly low, since the barium ion is even larger than the calcium ion. The melting point of BaO is 1,920ºC.

If you want to find out more about the subject of ionic bonding, please go to the older pages that I wrote in 2004 for my 10th grade at the time. Today this substance is already dealt with in class 9. On these pages you will also find sections on crystal structures and redox reactions, which actually only have something to do with the topic of ionic bonding.